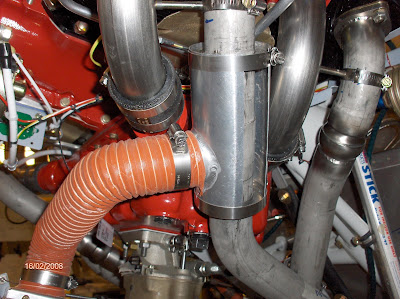 Finding room for the carb heat muff has been quite problematic. It would have been much easier with a cross over exhaust, but heeding Vetterman's advice I opted for the 4-pipe. In order to make it fit I had to file some extra holes on the far side of the muff to allow for the nuts and bolts that connect the two halves of the pipe together. It was a long afternoons work but I am very pleased with the final result. It (just ) clears everything.
The EGT probes are all installed. Rather than have them stick out, I have elected them to face inwards so the wiring will be between the manifold pipes and the engine block. That is one of the next tasks. 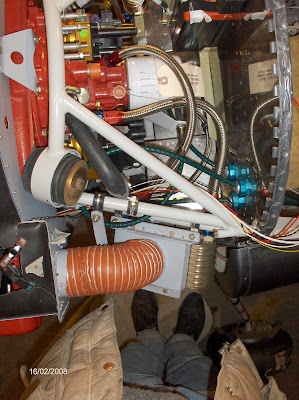 This picture, from above, shows things are getting pretty tight behind the engine, but everything will fit in I am certain and I will retain good access to the oil filter. The oil pipe across the top is not currently connected. I am waiting for a 90deg. fitting to arrive from Aerosport Power to replace the 45deg. the engine was supplied with. I just do not believe it is possible to get a hose onto a 45 when an MT prop governor is installed.
The breather is installed and has a clear run down and ends just above the exhaust . The idea is that any oil mist coming down the breather is burned by the hot exterior of the pipe rather than becoming an oily mess on the underside of the aircraft. Also, it is hard to see how the breather could freeze up at the exit in this location. The concern I have is have I put the exit to the breather in a low pressure area so the pipe will be sucking on the sump. A similar installation worked well on my -9a.
(And 'yes' its cold in my workshop as you can see by my old coat.) 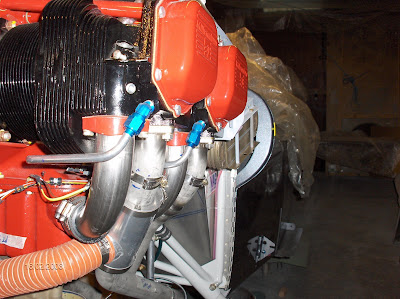 Here you can see that the oil cooler, although hung on the outside of the engine mount, still fits inside the cowl cheek profile, as does the carb heat muff.
# posted by Retro @ 10:51 AM