(As always, double click the pictures if you want more detail.) 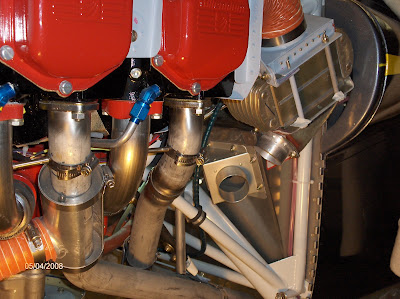 Heater - I decided a long while ago to take the cabin heat off the oil cooler rather than an exhaust muff. I am in the UK which is a temperate climate, so I do not need Alaskan quantities of heat, to keep warm. (As I write this it is snowing!) Those that do it this way usually report plenty of heat, though there are plenty of folk out there who will argue it is a really bad idea. To me the pluses are a much reduced problem of carbon monoxide, fewer parts/less weight, and those that do it this way report a much nicer, less 'scorched ', quality of air in the cabin. What is the downside? Very little as far as I can see. Worst case I can always buy an exhaust muff and hook it up. I had to make up a shroud to gather the air after it has been through the cooler which exercised my fiberglass skills. It's not pretty but it is reasonable on the inside, where it matters. People will reasonably comment that the efficiency of the cooler will drop dramatically. That is certainly true, but while I don't live in Alaska I don't live in Arizona either. My Supercub with an O-320 and the same cooler struggles to keep warm, and that only travels at 100mph. For break in, I will disconnect the cabin heat system, and seal it up, and remove the collector, since clearly at that stage the engine will be generating more than normal heat. If all else fails I will click the switch which turns on the Mercedes Benz seat heater that I will be sitting on. 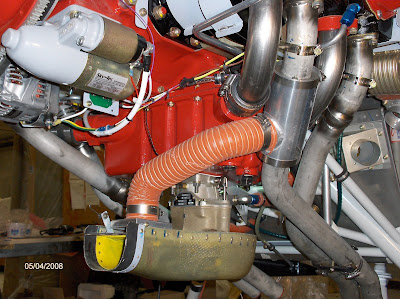 As each additional system is installed, despite my utmost efforts to think ahead and plan what else has to be added, the systems maximise their efforts to claim the same space. A good example was the screw on the heat box in the picture above. Its nut was claiming the same space as the tail of the bolt on the gear leg. If I had known this when I was putting the gear leg on I could have packed the head out with two more washers. I contemplated pulling it out in situ, but ended up by filing some of the tail off. To bolt the heat valve on, 8 #6 nuts and bolts still took 4 hours! 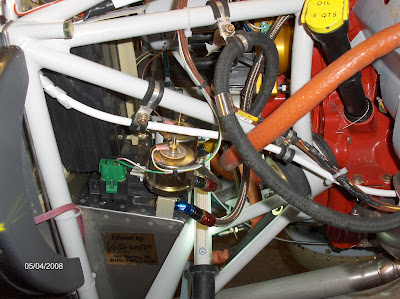 Pressure Sensors - FP, OP, MP have all found a home in front of the battery on top of the step. They are accessible if they ever need replacement and the hose runs are quite reasonable. I took advice from VANS as to which hoses to buy for a -4 and they certainly mostly erred on the long side. Better than short I guess.

There has been a little discussion about the oil tube/ dipstick for -4 on Vansairforce recently. Many people end up with one that is too long. Aerosport Power knew of the issue. This is what they supplied to me. If you cross their palm with silver I am sure they will sell you one. 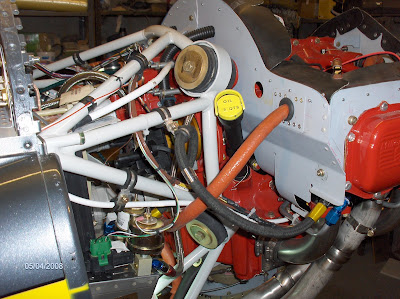 It turns out that the carb heat muff works well as you can see from the graph below.

After an initial 2000'climb from 300'ASL, the engine settles down at about 23 square, and the engine leaned. The OAT is around 58F, and the carb temperature due to the venturi and vapourisation of the fuel, running at about 51F. On pulling full carb heat the temperature rises to around 63F. It looks as though if I had left it on a little longer, I would have had a slightly higher gain since the gradient of the curve is not yet flat. I do this 3 times. At around 13:05, I reduce power and again pull the carb heat. This results in a much larger gain, which is in fact when you really want it. This time with the engine developing little power for the descent, it goes more than 15F above the ambient temperature.

Comments:
Hi Steve, looks like your project is really close to finishing now. On carb heat, our RV-4 G-IIGI was an import in 2005 from Bend, Oregon, and as it came it had no carb heat muff; so it just relied on the warm lower cowl air when the carb heat flap was set to HOT. I thought this wasn't up to the job so bought a single pipe half heat muff I think from Cleveland and routed the exit to the carb via a 2" SCAT tube and a plenum over the carb alternate air inlet. This setup didn't work well enough and we experienced quite a bit of carb icing, leading to one precautionary landing at Shoreham. I then removed the single pipe muff and ducted the air from my monster 2-pipe closed muff on the RHS of the cowl which used to be used for cabin heat (it is fed by upper cowl ram air, and is a big muff at about 12" long). We have no cabin heat now. This setup has worked flawlessly and we get about 30rpm drop with carb heat on, and no carb icing since, even though the inlet air is cooler ram air. I'll send you some pictures of you like. By the looks of it the muff you have on G-IKON looks better than my first one but less good than what I went to (although you will be drawing warmer lower cowl air). Hope this info is useful.

Afandi, good to hear from you. I had the same carb heat, just the flapper, on my -9a. It worried me. Hence this system. I will let you know how it works out. How do you get on with no cabin heat?

I have been getting stuck into the firewall forward on my RV - 4 and I must say I really like the stuff that you are doing with yours. The battery forward of the fire wall and the positioning of the cooler are both things I haven't seen on other RVs but look to be very sound.

I was puzzling about where to hang the cooler and what you have done makes sense. The old starter is really heavy and needs an overhaul so I was thinking of springing for a Skytech to save weight.

In contrast to your plane mine is a minimalist build and I am thinking about the need for electrics. I cant see the sense in using a master relay and breakers in a two switch panel when the extra wiring exposes the circuitry to more risk of shorts than leaving them out all together. Will have to think about that.

Thanks for going to the effort of documenting your project for people to borrow your ideas. I am just so "over" building this plane. I really need every bit of inspiration just to keep on going. I just want to go flying. Using your ideas an ingenuity allows me to be just that little bit lazy.

WRT the starter please take a look at my 5th July '08 post, in particular the postscript. i really woulD go with the NL model despite the extra weight.

WRT the wiring I would suggest you think about putting a master relay to a fuse block and take all the circuits (not the starter) from there. The top picture in the 19th May 08 entry on the electrics section has a picture. It wont weigh much and nothing live need be exposed. In fact this way if something were to screw up the fuse will protect the damage from spreading.

By the way a 2 switch panel would be impressive!

I got down to 6 though some do multiple functions.

After those 6 there are switches on the devices. eg If you want the radio on you turn it on.

Switch 2 is the interesting one. The idea is you have to turn the strobe on before oyu start the engine. At the end of the flight if you forget to turn the master off the strobe is still flashing.

Just my thoughts. Have fun!